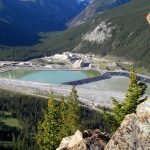 In the Americas, our two PGM operations, Stillwater and East Boulder, are located in Montana, in the United States (US). These operations extract and process PGM ore from the J-M Reef, the only known significant source of PGMs in the US and the highest grade PGM deposit in the world. They produce primarily palladium and platinum (78% Pd and 22% Pt), which are referred to as 2E PGMs. We also own and operate the Columbus Metallurgical Complex, also situated in the town of Colombus, Montana, which smelts material mined to produce PGM-rich filter cake and recycles autocatalysts to recover PGMs.