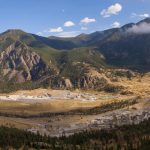 Stillwater and East Boulder are shallow to intermediate level underground PGM mines situated 85 miles southwest of Billings in Sweet Grass County and approximately 32 miles south of the town of Big Timber, in the state of Montana, in the US.