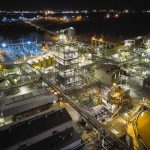 Kroondal is a shallow, low-cost, mechanised underground PGM mine with two concentrators located on the Western Limb of the Bushveld Complex, 12km east of the town of Rustenburg in the North West Province, of South Africa, some 120km north-west of Johannesburg. We operated Kroondal subject to a 50:50 pooling and sharing agreement (PSA) with Anglo American Platinum (Amplats) until January 2022 when we acquired the remaining 50% of this operation.