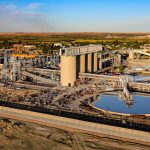 Beatrix is a large, shallow to intermediate level gold mining and processing operation located in the Free State Goldfields of the Witwatersrand Basin, near the town of Welkom in the Free State Province of South Africa, 240 km south-west of Johannesburg.