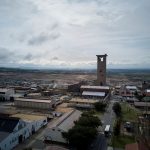 Kloof is an intermediate to ultra-deep level gold mine, situated in the West Wits Line of the Witwatersrand Basin, near the towns of Randfontein and Westonaria, approximately 60km west of Johannesburg, in province of Gauteng, South Africa.

At 31 December 2021, Kloof had combined surface and underground gold Mineral Reserves of 3.8Moz and Mineral Resources of 31Moz.

At Kloof, we are focused on optimising the Mineral Resource, stabilising production profiles at current performance levels, reducing pay limits through quality mining and cost reduction, targeting secondary reefs on an incremental basis above existing infrastructure and the mining of low-grade surface reserves to fill excess metallurgical capacity.